What Servant Leadership Means to Me – David Geurin

April 29, 2015Written by EditorTSA
Leave a Comment
(Originally posted on DavidGeurin.com)
By David Geurin
The traditional idea of leadership was power. Leaders were expected to control and coerce. To make sure that followers were productive and efficient. To enforce policies and procedures. Principals and teachers were praised for ‘running a tight ship’ or ‘keeping their ducks in a row.’ A quiet classroom and stern educators were considered signs of leadership. Even today, when people I encounter discover I’m a high school principal, it’s often followed by comments related to compliance, discipline, or control. 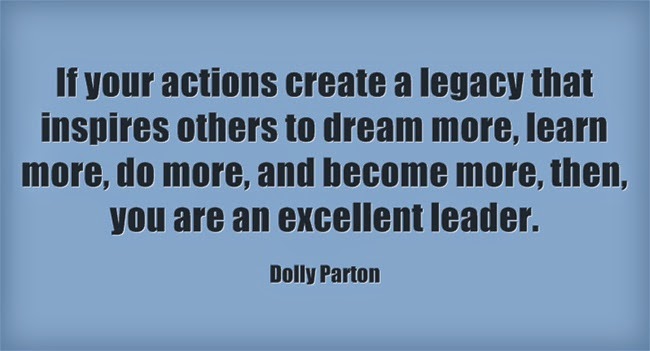 But I have very different ideas about what it truly means to be a leader. I don’t believe a person needs positional authority to lead. It can come from anyone who has a desire to serve and the capacity to do two things: challenge and inspire. Leaders use their influence to empower others, to help them be the best version of themselves. As a result, leaders create more leaders.To me this is servant leadership. The servant-leader may not have positional authority. In fact, he or she may be uncommonly lacking positional authority. But through an attitude of service gains influence that helps others “dream more, learn more, do more, and become more.” Leaders challenge and inspire.A few years ago I was driving to school and finishing off an apple that was my breakfast. As I finished, I rolled down the window to toss the apple core out the window. When I let it go, I could feel my doctoral ring fly off my finger. My gut sank, and I swear I even heard the ping as it struck the pavement. I instantly pulled my truck to the side of the road to begin searching, but in the morning darkness there was no use.Several times I returned to the spot to comb the side of the highway for the lost ring. A few friends offered to help. I even used a metal detector to assist the search. But the ring was gone, presumably forever.Months later I received a phone call on a Sunday afternoon. A man’s voice asked if my name was David Geurin. “Yes,” I replied wondering what this was about.”Did you happen to lose a class ring?” he continued. I was stunned by the question. Surely this couldn’t be what it seemed.Sure enough, the ring had been found.

The man on the phone explained he hadn’t found the ring. A friend of his found it. His name was Lane.

Lane walks all over town, usually while sipping a large fountain drink as he scans the ground looking for loose change. Lane is mentally handicapped and unable to live on his own. He lives in a group home but spends most of his time walking and looking for treasure. And boy did he find something interesting when he picked up the gold ring!

He carried it in his pocket for a while, not realizing there was a name inscribed on the inside, thinking there was no way to find who it belonged to. When he showed it to a friend, he noticed my name and asked if Lane would like to see it returned to its owner. They found my number listed in the phone book.

Lane was so proud that he had returned the ring. He truly was a hero in this story. He could’ve bought sodas for years if he had selfishly used the ring for his gain. But his actions were noble and through his selflessness and his big heart he did something only a leader can do. He challenged me and inspired me. He caused me to “dream more, learn more, do more, and become more.”

Lane’s actions helped me learn about gratitude, empathy, and unselfishness. I was humbled by his spirit of wanting to help me, a stranger who he didn’t even know. I immediately recognized that I was the follower and he was the leader, in this chain of events

Robert Greenleaf coined the term servant-leader in 1970. His ideas in many ways repeated ones from ancient texts, and yet in modern leadership practice, the idea of being a servant was far from what leaders were expected to be. The following are a few quotes from Greenleaf:

“The servant-leader is servant first… It begins with the natural feeling that one wants to serve, to serve first. Then conscious choice brings one to aspire to lead. That person is sharply different from one who is leader first, perhaps because of the need to assuage an unusual power drive or to acquire material possessions…The leader-first and the servant-first are two extreme types. Between them there are shadings and blends that are part of the infinite variety of human nature.

“The difference manifests itself in the care taken by the servant-first to make sure that other people’s highest priority needs are being served. The best test, and difficult to administer, is: Do those served grow as persons? Do they, while being served, become healthier, wiser, freer, more autonomous, more likely themselves to become servants? And, what is the effect on the least privileged in society? Will they benefit or at least not be further deprived?“

A servant-leader focuses primarily on the growth and well-being of people and the communities to which they belong. While traditional leadership generally involves the accumulation and exercise of power by one at the “top of the pyramid,” servant leadership is different. The servant-leader shares power, puts the needs of others first and helps people develop and perform as highly as possible.
Robert Greenleaf recognized that organizations as well as individuals could be servant-leaders. Indeed, he had great faith that servant-leader organizations could change the world. In his second major essay, The Institution as Servant, Greenleaf articulated what is often called the “credo.” There he said:

“This is my thesis: caring for persons, the more able and the less able serving each other, is the rock upon which a good society is built. Whereas, until recently, caring was largely person to person, now most of it is mediated through institutions – often large, complex, powerful, impersonal; not always competent; sometimes corrupt. If a better society is to be built, one that is more just and more loving, one that provides greater creative opportunity for its people, then the most open course is to raise both the capacity to serve and the very performance as servant of existing major institutions by new regenerative forces operating within them.” 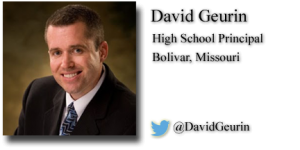 David Geurin is a High School Principal in Bolivar, Missouri. He shares his insights on his blog, DavidGeuring.com. Follow David on Twitter at @DavidGeurin.