What is Your Story? – Douglas Elmendorf

“You are not merely here to make a living.  You are here to enable the world to live more amply, with greater vision, and with finer spirit of hope and achievement.  You are here to enrich the world.  You impoverish yourself if you forget this errand.” – Woodrow Wilson

Let’s face it, none of us chose a career in education because of the opportunities for obtaining great wealth.  You probably heeded the calling to be an educator because you wanted to make a meaningful difference in the lives of kids, and felt you had the capability of doing so.  As President Wilson suggests, we are here to enrich the world – not our stock portfolios (whatever those are!?).

One way we express our passion is through storytelling.  Over the years, I have heard many heartwarming stories of how teachers have interacted with their students in ways that made positive and lasting changes in the lives of young people.  Oftentimes, however, they were not aware at the time that they had such a profound impact on a young boy or girl.

At a school concert, during my first year as a music teacher, one of my clarinet players was clinging to her father’s promise that he would show up to watch her play her first solo.  He never did.  I was very young and wasn’t exactly sure what to say to this young 10 year old girl who could not stop crying after the concert.  I eventually spoke from my heart and told her, “When I get married and have a daughter some day, I hope she is a lot like you.”  Although I was certainly trying to make her feel better, I genuinely had a special place in my heart for this vibrant, sweet girl who worked very hard to be the best clarinet player she could be.  Despite my desire to brighten her mood, she grunted a barely audible “thanks” to my comment, and continued to sob until her mother picked her up (her mom also wasn’t in attendance).  Thirteen years later, I was at a Ruby Tuesday restaurant with my wife and four children.  As we were being seated, I heard someone yell, “MR. ELMENDORF!”  When I turned around, I saw the clarinet player, except now she was a 23 year old young woman.  (It’s not often that young women come up to me in restaurants and put their arms around me, so it was quite the scene).  She asked if I remembered her, which I assured her I did.  Then she saw the little girl next to me and said, “Is that your daughter?”  “Yes!” I responded.  My former student then looked at me with a big smile and asked, “Is she as much like me as you hoped she would be?”

My pastor shared a story in a sermon that has helped me to understand that what we do every day has a lasting impact, even if we don’t notice it right away.  It’s called Pushing Against the Rock.  It is about a man who was directed to continuously push against a large rock.  The man pushed against the rock for a long time with no noticeable results.  After many years of apparent failure, the frustrated man questioned what he was doing wrong and why he had not moved the rock.  The answer given to him was that he had really not failed at all; he was called to be faithful to his cause, and he had demonstrated trust in following through with great determination.  By pushing against the opposing force of the rock, the man had grown far stronger than before with large arm, leg and back muscles.  As a reward for his faithful efforts and perseverance, the rock was moved for him.

As a teacher in the 1990’s, I tried to bring immediate comfort to a distraught little girl and felt like I had failed miserably.  I now realize that we, as educators, have been called to be faithful and obedient to our calling to enrich the world, even if we don’t see immediate rewards, or any rewards at all, for our daily toil.  In the end, we will all be stronger for our commitment to the cause. 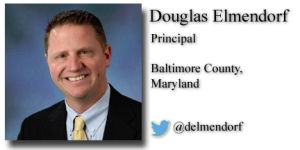