The Challenge of Consensus – Michael Wirtz

(Originally posted on Our Work, Their Education.)

I find myself in a lot meetings, many of which I organize and lead.  In the best moments, meetings are worth everyone’s time because they create the opportunity to test out the ideas of the group related to a worthy agenda issue, and they can move a project forward by allowing a group reach a consensus position.  At their worst, they waste people’s time and create frustration.  Admittedly, I’ve unfortunately led both types of meetings.

The most challenging moment in a meeting (or series of meetings), however, is reaching a  consensus decision.  Recently, I was working as a part of a large group tasked with making a decision that impacted the school community.  Thoughtful people around the table brought solutions to the group, probed at options under discussion, and reasoned with one another.  And yet, there was no agreement on how we should proceed.  The meeting had the sense that we could go at this issue for weeks and not reach consensus on how to proceed.  Sensing this moment in the meeting and the need to adjourn for other commitments, I laid out the varying viewpoints expressed in the meeting and then I did something I rarely do.  I said that I would take the conversation under advisement and work with another colleague to develop a solution that we would report back to the group.

So does my action represent a failure in terms of building consensus, or did I save the group lots of time?  Some might say it was a failure of leadership, and that I needed to get everyone to a place of compromise.  However, in my estimation, I saved the group time and energy.  Here are some things to consider when leading a group through a discussion like the one I note above:

1.)  What does your school culture tell you about consensus?

2.)  What does it “cost” you as the leader to make the decision after considering the group’s input?

While I had wanted to get there as a group, I also know that we had other pressing issues ahead of us.  Given that I understood the various viewpoints within the group and the how the decision would play out, I felt comfortable to make a decision that would best serve the needs of the school.  In doing so, I knew that not everyone would agree with me, and I knew why they would not agree with me.  However, I left that meeting making sure that my colleagues knew I understood the complexity of the situation and that they were heard in the moment.

3.)  Why not specify the group from the outset that the conversation in the room was simply to advise the decision maker?

While I realize that there varying levels of decision making power within an organization, if a group of any type is sincerely being engaged in a decision, then the ideal case is to arrive at a solution that emanates from the group itself.  For a school leader to come to a group over and over but not actually allow for real decision making opportunities devalues the contributions of colleagues and the perspectives they bring.  I feel the best option is to arrive at consensus within the room.

Take stock of these questions the next time you’re faced with a decision point, and as a leader, do not be afraid to make this call once in a while.  It doesn’t work in every situation, but it might be the best way to clear the decks and move a group forward to tackle bigger issues. 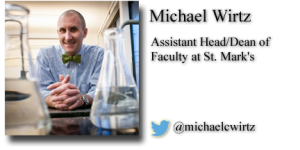 Michael Wirtz is the Assistant Head/Dean of Faculty at St. Mark’s (MA). He shares his insights on his website, Our Work, Their Education. Follow Mark on Twitter at @michaelcwirtz