Power: Embrace it, Respect it, and Seek it in Others – Kenneth Durham

(Originally posted on Ripples of Change.)

I recently wrote about Climate and Culture and for Leadership Day 2014 I would like to expand on these ideas and share what I have newly learned about Power.

Leadership is a group phenomenon that occurs when two or more people interact, and an individual or subgroup intentionally seeks to influence the behavior of others (Owens & Valesky, 2011). Thus, leadership cannot occur in isolation. More significantly, a leader only exists when other people are willing to follow regardless of rank, position, or title.

But what gives some the ability to lead, to influence others?

Power is the key to a leader’s ability to influence. “Power is commonly considered to be the capacity to influence others” (Owens & Valesky, 2011, p. 203).

Owens and Valesky (2011) submit that there are five different types of power that a leader can use singularly or in combination to influence others. The five kinds of power are

In a recent leadership retreat, Dr. Paul Porter offered the following seven sources of power that leaders should seek to understand to more effectively influence others with

Irrespective of which list or sources you determine are for you, we must recognize that each type of power is available and each has its use. I know what you’re thinking… How does coercive power have its use in today’s society? Doesn’t Daniel Pink’s work present a strong case for the elimination of rewards?

Well… Think about why we pay our taxes, wear our seat belts and do not rob banks on a regular basis. You guessed it, the coercive power of the law and the known consequences. As far as reward power, even Pink states that in certain scenarios, ones that require noncreative tasks, rewards are an effective strategy. Moreover, think about how great it feels to get words of encouragement from others, a hand-written note from someone or a comment on a blog post. These gestures go along way for almost all of us.

So yes, power is a great tool that leaders should embrace and seek to understand when and how to use each of the above sources. However, power is also a scary entity that must be shown respect. On one end of the spectrum you have people with authority and the power that accompanies that status who refuse to make a decision and exercise their power.

Conversely, there are examples of people throughout history, and in some organizations today, who know what power feels like and indiscriminately exercise their power over others. This end of the spectrum reminds me of a recent #CAedchat question. 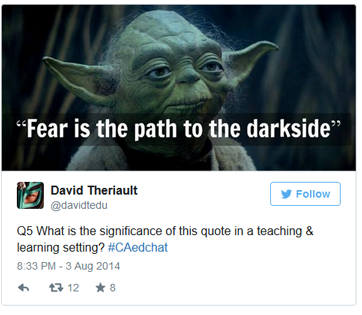 Fear has the ability to drive us to do things that we would not otherwise do. Look how fear drove Anakin Skywalker to irresponsibly use power and transform into Darth Vader before being saved at the end of his life by Luke. Ahhhh….. If we could all only lead like Master Yoda.
Effective leaders do not just understand, embrace, and respect power; they also seek it in others. Every person who we interact with has power. Strong leaders seek to help others identify their power and foster an environment where others can use their power to influence those whom they lead. In other words, they empower others to lead. They build organizational capacity by relinquishing authority to those whom they influence. By being a leader that believes in this style, you are modeling exactly the behavior that we want educators to use with students. Get out of the way of all teachers and encourage them to use their power to lift up their classrooms, their schools, and our students. 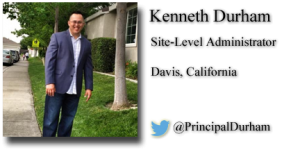 Kenneth Durham is a Site-Level Administrator with Davis Joint Unified School District (DJUSD), located in Davis, California. He shares his insights on his website, Ripples of Change. Follow Kenneth on Twitter at @PrincipalDurham.