It is definitely that time of year. And not just for resumes and countdowns (spring break and end of the year).

Schools districts are in the process of hiring administrators for next year.

More people will be joining me in this challenging profession (notice I didn’t say “foolish” people… although you can assume it’s implied).

In a matter of months, they will be neck deep in troubles.

The problems they will face are tough, but manageable. Especially, if they have an idea about what they are getting into.

Being in charge of adults makes you borderline stupid.

But someone has to do it.

When you are in charge, you quickly learn the tricks of the trade or you get steamrolled. And unemployed.

Once hired, people will expect you to make decisions. No one likes wishy-washy. You will never hear a staff member say “I wish my (principal, assistant principals, dean, superintendent, etc.) was more wishy-washy.”

People want those in charge to be decisive. While people hate being told what to do, they hate not being told worse.

Now this doesn’t mean they will approve of your decisions. In fact, some people will take a great deal of pleasure in pointing out your mistakes (and trust me, you will make hundreds… if things go well and you aren’t in the profession very long).

That is okay, as mistakes and second guessing are part of the job.

If you are hired to lead, you need to do it or get out of the way.

While staff members may criticize your bad decisions, they will be even more critical if you don’t make decisions (in the profession we call that “smelling blood”… and by we, I mean me).

Since this is a lose-lose proposition for you, make well-informed decisions and hope for the best (and by hope I mean pray and call your lawyer… not necessarily in that order).

Others may point out your faults, but deep down they don’t want to be in charge. If being in charge was easy, everyone would do it.

People will always offer advice on the easy situations, but when things get difficult you are on your own.

While opinions are a dime a dozen, solutions are much harder to find.

This doesn’t mean you shouldn’t ask for help. Just make sure you involve people with knowledge of the situation. And those people want the situation to improve.

And if you force people to serve, they won’t be happy. Or productive. And then what have you accomplished.

You have angered people and you end up with a watered down idea.

To get something done a committee should consist of no more than three people, two of whom are absent. – Robert Copeland

You will also learn that as a school administrator you are no longer a teacher.

I picked up on this when I noticed the sign on the Teacher’s Lounge didn’t say Teacher’s/Administrator’s Lounge.

You are no longer in the group; you are responsible for the group. The trick is remaining available and approachable to all employees, but not getting too close to some or all.

A good leader is part of the group, but not in the group.

Leaders must be close enough to relate to others, but far enough ahead to motivate them. -John Maxwell

I believe that people want to be led. They just don’t want to be bossed. Having a boss and being bossed are two different scenarios.

Employees have opinions and like to share their thoughts. Especially on decisions that affect them. And this is a good thing.

Most good leaders will tell you that some, if not all, of their best ideas came from other people.

Give an invested person a problem and it is highly likely they will come up with a solution.

If you tell people where to go, but not how to get there, you’ll be amazed at the results. – George S. Patton

Another challenge is leading people to change. Just a heads up… people don’t like change. At least at first.

People like change when it is over. But only after it has become the new norm.

Employees have put time and effort into the status qou. Things just didn’t accidently become like they are. Someone worked towards it.

So when you ask those same people to change, their first reaction is often “This will never work”

They usually don’t have a reason why it won’t work. Unless you count “Because” as a reason.

Most people react to change better than they think they will. Too often, they don’t give themselves enough credit on their ability to adjust.

And the older we get, the more of a challenge it seems to be (I am well on my way to reaching my goal of being an angry old man who is stuck in his ways).

People underestimate their capacity for change. There is never a right time to do a difficult thing. A leader’s job is to help people have vision of their potential. -John Porter

You can lead people to change if you give them several things. Fair warning, time to adjust, direction, and support are all important.

But there is one thing that is more important.

The people involved have to be told (usually over and over) that everything is going to be fine. We can survive this and we (and students) will be better off for it.

Hope is free. Feel free to spread it around.

A leader is a dealer in hope. -Napoleon Bonaparte

If you want to be successful, this is the best advice I can share.

Don’t be afraid to look stupid (it’s going to happen, so don’t fight it).

Surround yourself with good people. Don’t feel threatened if you aren’t the smartest person in the room.

Take this as a blessing, not a threat.

The ultimate leader is one who is willing to develop people to the point that they surpass him or her in knowledge and ability. – Fred A. Manske, Jr.

Like with most things in life, leadership isn’t overly complicated.

In summary, my 4 Keys to LEAD.

Listen more than you talk.

Encourage more than you dictate.

Anticipate more than you react.

Don’t be the smartest person in the room.

Lastly, keep in mind that I have no idea what I am talking about. This advice, says my lawyer, should not be taken for anything more than it is… rambling incoherent thoughts of an administrator who is not getting enough sleep. I am just like everyone working in a classroom or a school… wondering if my spring break will ever get here. 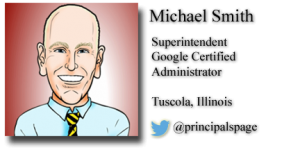 Michael Smith is a Superintendent, Self-Proclaimed Author of #1 Read Superintendent Blog in the World, Google Certified Administrator, and Speaker. He shares his insights on his website, Michael Smith’s Principal’s Page. Follow Michael on Twitter at @principalspage.