I have been an educator my entire adult life. I have lived and breathed education as I worked with kids in one capacity or another through multiple decades. Just like anything else, when you live something long enough, it becomes part of you. It becomes your lifeblood. Unfortunately, as we get older, life has a strange way of interfering with our vitality. Our passions become rooted in our souls, yet we are met with forces which attempt to distort, confuse and destroy our lifelong missions.

The anti-public education movement is one such force disguised as a faction of righteous and noble efforts to protect our children. The tactics of these forces are rather simple and effective; keep the educators on defense. Force them to be reactionary and hit them very hard with regular doses of negative rhetoric.

I’ve written before about self-limiting beliefs. If an organization or cause becomes surrounded by erroneous beliefs, as far as anyone else is concerned these beliefs can become facts and people on both sides of the discussion will begin to think, feel and act accordingly. When this happens, those on defense begin to believe they are deficient in their own talents and skills. This perpetuates the cycle like a cancer while the flawed paradigm grows and begins to prevail. Perception eventually becomes reality and overrules rational logic.

As an educator, I’m sick and tired of hearing about the successes of Finland, Singapore and South Korea. I didn’t sign up for a contest, I signed up to be an educator. I don’t care to compete with other states here in our country. I want to develop better solutions for our schools residing in poverty stricken communities. I want all kids to succeed and I’ll never celebrate beating others who fall short. To me, when our mission is to teach kids to thrive, a competition seems rather distasteful. I prefer to leave such contests on the ballfields while we lift all children in our country. I don’t care to race educators to the top while leaving kids behind.

Our system focuses on the lack of success relating to impoverished schools. The bar gets raised without necessary supports. Higher standards, more accountability and punitive consequences perpetuate problems in the lower performing schools. They are labeled as failures and the crux of the blame is thrusted upon them. Their schools are destroyed and their communities are further decimated while people stand by and say, “Good, that needed to happen.” Sad but true.

Public education defines one of our most basic and necessary freedoms, yet the first inclination of many is to remove one’s right to a community school. Every community needs a public school with it’s doors open for kids to attend from every walk of life. Unfortunately, this concept doesn’t meet the needs of commercial interests and it’s easier to perpetuate the cycle to advance agendas which do not serve all children. 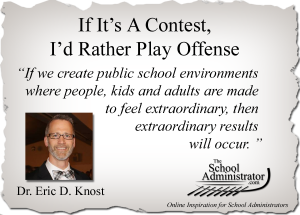 I am a proud public educator who has witnessed first hand the successes of our public education system. We should all find the ability to support the right causes while standing up against the negative forces which see no need for the necessary freedom of public education. Most critics of our schools haven’t set foot in a classroom for years, maybe never. If you really care, come see our schools. Visit our classrooms. Talk to our principals. Observe our teachers. Get the real facts, not the negative, invalid comparisons that prove nothing and ultimately perpetuate destruction. I am a public educator and I won’t tolerate my profession being shoved around nor will I ever be okay with groups who use kids as pawns. I will always take a stand and speak for the truth.

Public schools need support. We need to transform how we think about schools but we don’t need a political reform agenda. Schools need to be respected. If we create public school environments where people, kids and adults are made to feel extraordinary, then extraordinary results will occur. Kids cannot, under any circumstance, thrive in a negative setting. If kids don’t thrive, schools will not succeed.

The heart of an educator is a powerful thing. The future is watching and great moments are born from monumental circumstances. It’s time to turn a corner. It’s time to care about all students as individuals, not about how they compare to other people in other places. Regardless, the negative forces will not back down. They will continue with their attempts to misinform, disrupt, distort and promote their special and personal interests. If it’s a contest, then educators and supporters of public education must unite on offense for all kids. In a real system which leaves no child behind, there’s no need for defense.

As an educator, I prefer offense. 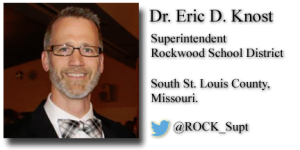 Dr. Eric D. Knost serves as the Superintendent for the Rockwood School District in South St. Louis County, Missouri. He shares his insights on his website, eknost’s Blog. Follow Dr. Knost on Twitter at @ROCK_Supt.