We’ve always known the importance of “getting the right people on the bus,” to borrow a phrase from Jim Collins.

As leaders, we each have in mind a picture of the “right” kind of person for our school—the right attitude, the right work ethic, the right interest in collaborating, the right coachable mindset, the right beliefs about kids.

Having such a clear portrait of the ideal educator is useful for hiring and coaching, but an “attitude profile” doesn’t do much good for our existing staff.

We all have people who—let’s be honest—we wouldn’t have let on the bus if we had a choice. They were on the bus before us, and may well be on the bus long after we’re gone, but their attitude and general approach to their work just aren’t the way we’d like them to be.

Have you ever tried to improve someone else’s attitude? Have you ever wanted to help someone want to approach their work differently? Ask this guy how well it works: Trying to improve someone’s attitude—wanting them to want to be the kind of person who doesn’t just wear the minimum number of pieces of flair—is a thankless task. It’s very difficult, and maybe even impossible, to hold someone accountable for their attitude.

Fortunately, though, we have another option.

If we focus on behavior instead of attitude, we’ll be pleasantly surprised to learn that, as leaders, we actually can influence people’s behavior.

If I have a cranky staff member who’s always complaining in staff meetings, I may not be able to change her attitude…but I can ask that she put any concerns on the agenda rather than derail the meeting to gripe.

And I may not be able to make her less negative…but we can establish a norm that if you raise a concern, you also suggest a solution.

Behavior is the point at which we bend our individual differences to the collective mission.

I may not want to have team meetings after school if I’m a morning person, but if that’s what we do here, that’s what I’ll do.

More than anything else, behavior is where school culture is manifested and defined. If you want to know what kind of culture a school has, don’t look at individuals’ attitudes (which may change from day to day). Look at what people actually do.

Create a clear, powerful vision for how you do things in your school, and ask people to get on board by acting in accordance with that vision.

A Helpful Side Effect

Now, here’s the “but wait…there’s more!” bonus to focusing on behavior.

Why? Because we believe what we do far more powerfully than we do what we believe. It’s a matter of good old-fashioned cognitive dissonance.

If I don’t believe all of my 2nd graders can learn to be proficient writers, yet I’m doing what I learned in our professional development and following our kick-butt writing curriculum, and my students are being fantastically successful…

That’s some serious cognitive dissonance, and the easiest way to resolve it is to change my beliefs. I probably won’t even tell anyone that my beliefs have changed, because I’m probably embarrassed that I ever believed my students couldn’t write.

When we experience cognitive dissonance because our behavior has broadcasted what we’re really about, it’s easier to adjust our attitude, beliefs, and feelings to match.

If you want to improve your school’s culture, look for ways to shape people’s behavior. 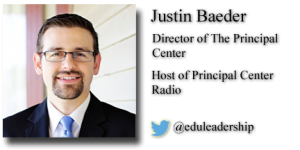 Justin Baeder is Director of The Principal Center and host of Principal Center Radio. He helps school administrators increase their impact on student learning through the High-Performance Instructional Leadership Network. Follow Justin on Twitter at @eduleadership