The Landscape of Failure – Traci Logue 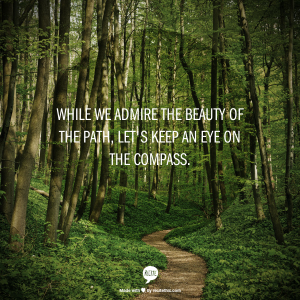 There is a lot of emphasis on failure these days. This post is just my way of sorting out, and making sense of, the current landscape. To observe and understand the forest among the trees. I enjoy the view. Mostly, I am sure of foot. But sometimes I feel think the concept of failure is like a boulder in the path that I am currently, carefully, trying to navigate around.

Recently I came across this quote in my feed: “I am a lifelong failure”.  I’m not sure about you, but I don’t want to be a lifelong failure. I don’t think my students do, either. I understand the underlying meaning. I just couldn’t help but focus on the words being used to convey it, and how often we say them…and how often our students hear them…

I’m okay with putting on my boots and walking through a rough terrain, a few pebbles and rocks knocking into my path, but I don’t want to lay down and roll around in the leaves of failure. Success is the goal. And I’m okay with saying that out loud. Maybe this is why:

I spent the first 8 years of my teaching career in an inner city school with an 80% economically disadvantaged population. The community itself had prevalent gang activity. Our maintenance workers spent as much time removing graffiti from the building as they did repairing equipment. We found things on the playground at recess that should never make their way to an elementary school. Teachers left during any given month of the year, sometimes with an “I won’t be back” on Tuesday and that was that. Many classrooms went unstaffed and had permanent, though rotating, subs. My first year, I took over a class like that in January. On the first day I was given a key, handed a few teacher manuals, walked to a portable building and told, “Good Luck”.  It was hard to get people to come, or stay. To say these students experienced failure in life, from many different fronts, is an understatement.

And then one day we got another principal. Our fifth in seven years. He introduced himself to us while standing in front of a huge sign he had made up that read, “Success Is The Only Option“. Nowadays, that would be frowned upon by many. However, that mantra, which he embedded into every. single. thing. he said and did that year, became something very important. Something we believed in. We bought into it-correction, we bought into him. The saying (message) was a part of the package. In that first year, the school went from a low-performing rating to recognized. From 45% passing to 80% passing. We won district championships in various academic competitions that, prior to that year, the school did not even bother to enter. Another of the accolades our students received that year was a little *asterisk alongside our TAKS scores for our high commended scores in writing, science and I believe also math.   I’m pretty sure that never in the history of ever has an asterisk meant so much! Trophy cases were built. People cried. Not because we failed, but because for the first time, success happened in many areas. And success is contagious. And sometimes, so is failure. And maybe that’s where I veer off this path.

That year, the right people at the right time came together and accomplished remarkable successes. Though it was five years ago, my time in that school impacted me (and taught me) in many ways, and I think it will remain forever in my soul. Perhaps that is why I remained there so long–I had things to learn.  I learned there that if you want success bad enough, and if you can motivate and lead those around you to want it just as much-to work together toward that same vision- it can happen, no matter how dire or bleak the circumstances may appear. Yes, we made mistakes. But our focus, you see, was not on failure. The kids in that school had experienced plenty of it. Our focus was on ending failure. So maybe that’s why this failure thing is so interesting to me now.

Before I receive a bunch of cranky emails, let me insert this disclaimer: Failure, while striving toward success, is necessary and good. It builds resolve and leads to answers.  If we want innovative, creative school communities and lifelong learners, we must have an environment conducive to taking risks, and risks are great opportunities for failure. So I get that. I just don’t think it ends there.

Failures can drive us. When I failed to master the moves in my first few Zumba classes, I continued working and practicing. Not because I love failing, but because I wanted to succeed. My goal was not to fail. Certainly not to fail for life. My goal was to succeed. My struggles, well, that was part of the good stuff. The stuff that  stretched my resiliency and strengthened my resolve.  Failure is a byproduct of learning. However, so is success. Why is our focus sometimes placed on one to the exclusion of the other?

Sometimes, it seems we are so busy discussing (celebrating) failure that we are no longer talking about success.  I believe success is what we are all after.  What is wrong with saying, “I want to be successful” or even “I am okay with failing while pursuing success“? Why do we sometimes, many times, not include that in our discussions about failure? Truly, our path is paved with good intentions. But, while paving that path, have we lost sight of the destination we want? Are we paving a path that leads to, just another path? And another? And another? Is it because we are so enamored with the beauty of the path, that we are no longer in pursuit of the destination? Have things like, “Success Is The Only Option” become bad words? Is that okay? When? And under what conditions? 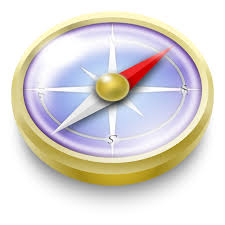 And then, there’s the meaning of failure, itself. Grappling through a difficult problem or learning from and creating a new strategy when the previous one doesn’t work is, in my opinion, not failure.  In fact,  we might make the argument that overcoming, struggling, adjusting and persevering are actually traits of success developed during a trial, thus not even following the definitive meaning of the word failure.  We experienced many of those things on our way to 80% that year. Never once did we call them by the name “failure”.  So maybe I’m confused about what we are labeling as failure. I wonder if our students are, too?

Truly, there are many  who, through their failures, went on to accomplish wonderful, beautiful, successful things. Michael Jordan. Steve Jobs. Thomas Edison. You. Me. I’m glad that those people (and you, and me) didn’t give up; continued to pursue; kept an eye on the compass. Succeeded.  Without the mistakes, success may not have come. By the same token, without the eventual success, we wouldn’t have those wonderful, beautiful things. They (we) did not set out to fail. They experienced it. They learned and grew from it. But they went on down the path. Following the compass that pointed toward not failure, but success.

Is failure the magnetic field that points the compass? Or, for some, might it be something else? I am a person who will always root for the underdogs. I have walked a few of those rocky paths myself. Sometimes alone. Sometimes with a group. Changing paths when one isn’t leading us where we want to be. A means to an end. Pushing myself forward. Pushing others forward. Letting someone push me. I just wonder if we sometimes lose sight of the destination. Maybe that’s where my confusion lies. Maybe my current view of these paths and destinations is just an exercise in semantics. Maybe I don’t want failure to be seen as an end itself and wonder (fear) if that is what might happen- for some- if we continue to admire the look of failure, without placing an equal emphasis on the beauty of success.

Clearly defined goals and high expectations are a necessary component of any good learning. What are our expectations and goals? Because sometimes, however well intended our message- however well paved our path- we can distort and blur the view; we can break the compass, and find ourselves walking a path that doesn’t lead to where we want, at all.

Maybe one day I will look back at this post and realize that it was just another of my many failures on this journey of understanding and growth. Maybe that is how you are seeing it now. Or maybe not. I just want us (me) to be careful that we don’t miss the forest for the trees. 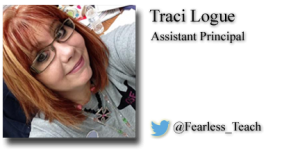 Traci Logue is an Assistant Principal at a Texas elementary school. She shares her insights on her blog, Fearless Teacher. Follow Traci on Twitter at @Fearless_Teach.