Poverty and the Public School Crisis-Where is Your Voice? – Dr. Latoya Dixon

(Originally posted on The Principal’s Perspective.) 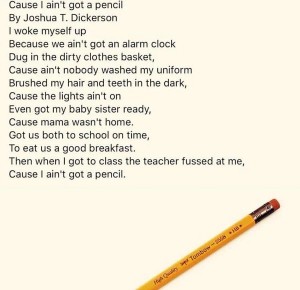 I saw this poem this week and it immediately gripped my heart. I got one of those choking feelings, when you feel there is something stuck in your throat but you know there is not. It’s been floating around Facebook, Twitter, and Instagram this past week so you may have already seen it. At any rate, I have to share Mr. Dickerson’s poem with you because it is the story of so many of our students.

Last Thursday night, I watched the Democratic political forum that was hosted right here in my hometown. I watch all of the debates, regardless of the party, because I think being informed is a responsibility of humanity. I’m always interested in what candidates say about education. One thing I heard in regards to this stood out to me-

51% of the nation’s public school children are living in poverty.

Read any of these recent reports for more information:
Mapped: The places where most public school children are poor. Washington Post. (May, 2015).

One of the things I’m most passionate about is how we help students of poverty help and save themselves. We know we cannot focus on the parenting. That is something we cannot control and cannot change. That’s why I focus on the students. I try to help them see how they can help themselves.

What I’m most baffled by however is how most current education legislation, policy, and anti-public school rhetoric is in direct conflict with these facts. Instead of focusing on how we restructure schools, provide different resources, more time, and more support to students of poverty and their teachers, it appears to me  that educators are fighting for their jobs or folding and giving in to what seems to be a war on public education. They are quitting. It seems more and more I wake up to a tweet of a teacher who has said enough is enough. Their narratives about why they are quitting is always wrapped in some sort of “I feel guilty, but I can’t do this any longer rhetoric.” Their posts go viral and teachers across the country share it on all kinds of social media venues.

A review of recent changes to public education across the country will lend you to see how Hurricane Katrina expedited the charter school movement in New Orleans, the Innovation Zones movement in Memphis and Nashville, Tennessee, and more. In just my 17 years, I’ve worked my way through No Child Left Behind, Race To The Top, the pay for performance movement, value added measurement, and now I am a co-principal in what has been deemed as a low performing school in a low performing district. That’s what the state says anyway. Seems we keep working to get out of some status only to fall into another. Seems like running in a hamster wheel to me. Most recently, the President as well as the outgoing Secretary of Education noted that there is too much testing in schools. If only they had heard the voices of educators before it was a comfortable time to say such as one is exiting the building, I may have been able to appreciate the acknowledgement slightly more. It seems to me that if you pursue a career in education, you ought to be aware that things will be done to you, very rarely for you or with you.

How long must we keep allowing the education profession to be under siege and stand idly by complaining about what is being done to us, but only making our voices heard in the “I give up narratives”? How many more teachers of the year have to post their “Why I am Quitting” narratives to Facebook? How many more polices do we suffer through, quietly hoping nothing too bad comes of it, and praying our careers can survive this “Everybody knows how to fix schools because they went to one once” era? When do we make our voices heard? How do we share our story of the great work and lives we are touching with the people who are deciding on evaluation metrics for us?  For years I’ve had conversation after conversation with my teacher friends about how much we wish some certain other people could come into our classrooms and schools and not just observe, but literally walk in the shoes of a teacher all day long! The day does not end when the official school time says so either. How long must educators sacrifice their personal and family time because we are working to improve student achievement and our own effectiveness, fighting against all the “stuff” our students bring to school and the policies, rules, evaluation metrics?

Knowing that half of America’s students are students of poverty ought to lead us to doing something different. We cannot continue in the same manner and expect something different. There have been some changes, but they haven’t all been positive or in response to the ever increasing rates of poverty among our students. Teacher pay isn’t where it should be and neither is per pupil funding. We are being asked to do more with less.  And the amazing thing is… we are doing it and doing it quite well (in my opinion).  When folks talk about what schools used to be, I’m always tempted to remind them that we are past the one room school house phase-schools aren’t the only thing that have changed over time. People have too. In Rick Dufour’s book In Praise of American Educators, he notes just that. If you haven’t read it, you ought to read it. From Bill Ferriter’s blog you can get a pretty good synopsis. (Read more here: http://blog.williamferriter.com/2015/05/10/read-this-in-praise-of-american-educators) Ferriter writes:

In Praise of American Educators opens with a careful study of the common myths being advanced by critics of public schooling in America.

Convinced that the United States fails when compared to international peers?  In Praise readers learn that when controlled for factors like poverty that have a direct impact on student and school success, American students and teachers actually outperform every nation on Earth by a wide margin.

Believe that charter schools and vouchers are improving outcomes for struggling students?  In Praise readers learn that fewer than two out of every ten charter schools produce student achievement results that are superior to those produced by public schools.

Certain that testing is the best way to hold teachers and schools accountable?  In Praise readers learn that national exams like the NAEP testing program and value-added models for measuring the impact that individual teachers have on students have been widely criticized as unreliable by national organizations including the National Research Council, the National Center for Education and the Economy and  the American statistical Association.

DuFour’s central argument in Part One of In Praise is that our schools are actually succeeding in spite of our nation’s commitment to #edpolicies and practices that are badly flawed.  “The federal and state policies that dominate the school reform agenda in the United States,” he writes, “are ill conceived, based on faulty assumptions, and have no record of improving student achievement anywhere in the world” (p. 102).

I’d be remiss if I didn’t say that I am biased. I’ve been a Dufour fan for a long time and I’m sure there are some who believe his work and research isn’t without flaws. Isn’t that how research works though? We find something that confirms our bias and then someone finds something that confirms theirs and picks our beliefs apart. That sums it up in a nutshell I believe.

I don’t know much of anything for certain, but what I am certain of is that educators are at a critical point and they must make their voices heard. We can no longer keep our conversations inside the workroom or teacher’s lounge. We must move them beyond the hallways of our schools. We must tell our story and give those who think they know a real picture of what we are doing everyday. We must engage in the political process so that we give a voice to the issues affecting us as educators. While our work is missionary in nature, we should not subject ourselves to suffering silently. We have a right and a responsibility to share our front line perspective with all who are willing to hear it.

Who are you sharing your perspective with? Are you offering to present an informed perspective to those who have part of the story but not all of it? Recently, a teacher on our staff wrote several legislators regarding our low performing school designation. Her courage inspires me and I am so grateful to work with a teacher who has moved the conversation beyond our inner educator circle. I’ve learned so much from her. Believe it or not, he’s visiting our school next week. I won’t be hesitant to share the great work we are doing at our school, in spite of all the challenges our students face.  It may not change a thing, but at least I can sleep a little easier knowing I am sharing my voice. I can’t wait to tell him about the hard working and dedicated teachers and students at our school. What are you waiting for? Make your voice heard because our students need us and we matter!

Until next time- be you, be true, be a hope builder!
Latoya
@latoyadixon5 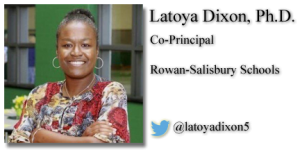 Dr. Latoya Dixon is a middle school co-principal and transformational leader. As a product of Rock Hill School District 3, Latoya began her career as a middle school English Language Arts teacher after graduating from Clemson University. She received National Board Certification and continued her education receiving a MEd in Educational Leadership in 2007. For five of the six and a half years Latoya was principal at Mt. Gallant Elementary, the school received several Palmetto Silver and Gold awards. Latoya is known state‐wide not only for her expertise as a leader, but also for her inspirational spirit. She is dedicated to her staff and her students. Dr. Dixon earned her Ed.S. in 2012 and PhD at the University of South Carolina in 2014. She currently serves as a middle school co-principal and transformational leader in Rowan-Salisbury Schools. Follow Dr. Latoya Dixon on Twitter at @latoyadixon5 and on her website, The Principal’s Perspective.