Lessons from Outside of Schools – David Hochheiser

Do you know what these are?  I didn’t until a stranger tossed the red one to me, and my seven-year old lit up with a “That’s the kind I usually use.” The joy in his face and the fun we had after will forever be a perfect example of differentiation’s power to me as an educator.

I’m having an amazing summer. There’s been a bunch of work, some solid reading (Lost at School, Switch, Freakonomics), some personal time, and a lot of fun with my kids and wife. Part of this has been three activities that struck me deeply as an educator who has always been in search of the best ways to help all students.  They hit me immediately as examples of things I believe schools absolutely need to continue improving upon.


Karate: You’ve all most likely heard of the different belts martial arts students earn.  I can’t speak for all styles and all dojos, but the one where my son takes lessons has multiple belts that signify an attained skill level and different age brackets that – more fluidly than the belts – help put students in classes with other students who approximate their ability level.  Mind you, this isn’t “tracking” at all.  There are two or three belts within each class for each age group, each of which covers around 7 or so years.  There’s a definite range in each class.  What are they doing that we should move towards replicating?


Yoga: I spent July really enjoying an unlimited pass to a Yoga studio (via Groupon).  While I certainly believe in the benefits that mindfulness and Yoga practice could have for all adults and students, I’m not going to write about that here, other than to offer you a link to my Diigo library on mindfulness: http://bit.ly/1g3U0Cl .  Instead, I’ll tell you how amazed I was that a single teacher could help a room full of up to forty students greatly benefit and grow from their time during class.  All poses came with options for less stressful and more advanced movements, all of which were discussed under the umbrellas of: “If it feels right for you…” and “If it’s within your practice today…”  The teacher modeled each version as the classes went through them.  What can schools learn?


Tennis lessons This is the big one, the one that got me writing.  Yet…it’s the shortest, smallest moment I’m explaining in this post.  My son is seven and went to our city’s tennis camp for a few weeks this summer.  A week or so afterwards, I thought it’d be fun for the two of us to hit the ball around for a while.  It’s a twist on the old-school, father-son baseball catch, and we were both psyched.  The problem was that he’s seven, and I’m not at all a tennis player, so enjoyably volleying was proving difficult.  And then, a pro stepped in.


Next to us was a guy giving lessons.  He must’ve overheard me trying to teach Declan to either go towards the ball as it’s going to bounce or back away so that he gets it as it’s falling from its bounce.  We only had three balls with us, so there were a lot of misses and a lot of time spent getting the balls back from out of play.   The instructor tosses me a red-striped tennis ball and put a bucket of them next to our court and says: “Try these, they have less compression.”   One hit, and I was sold as the ball only bounced enough to get up to my son’s racket at a speed that he could manage.  “Daddy,” he says, “that’s much better.  These are the balls we used at camp.”  Volleys came easily.  His face continued to light up.  He loved even showing off his “mad skills” for me with serves and backhands.   What can schools learn?


I know we don’t have the same conditions in schools as were there for karate, yoga, and tennis, but let’s not forget that we can create a culture in our classrooms that make it a place where all student want to come and learn.  In fact, that’s really the heart of our careers as educators, isn’t it? 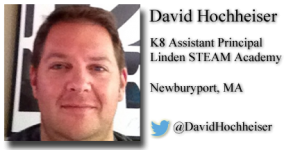