(Originally posed on A Principal Journey.)

“Procrastination is attitude’s natural assassin. There’s nothing so fatiguing as an uncompleted task.” – William James

I don’t know about you, but I tend to be a natural procrastinator.  Thankfully, I’ve gotten better over the last few years, but summer seems to bring the procrastination monster back to rear it’s ugly head.  In this post, I plan on covering a few strategies I’ve learned for fighting procrastination and getting more done.

1) Eat that frog!*  – “If the first thing you do when you wake up in the morning is eat a live frog, then nothing worse can happen for the rest of the day.” – Mark Twain.  Basically, “eat that frog” means tackle the most important or difficult task of the day first thing in the morning. Get it out of the way.  If you do this, you build momentum and everything else seems simple. You will tend to be more energetic and focused on your other tasks. If you don’t, then this most difficult task will lie just beneath the surface, haunting you and draining your energy as you work on less important items.

2) Prioritize – How do you know what is the most important task of the day? My system is simple. At the end of each day, I make a list of the things that I need to accomplish and transfer it to a notecard (So 20th century, right?).  I then number each task in order of importance.  At the start of each day, I work on task number 1 until I get it done.  Then, I move on to task number 2, and so on. At the end of the day, I rewrite the list and change/add items as necessary.  It is said that you should make the list right before bed so your brain will work on it as you sleep.  Don’t know if that’s true, but doing it the night before saves time in the morning.  (I have to add a disclaimer to this one: As a school administrator, there are so many distractions during the course of the day, it is often to hard to focus on one thing for an extended time.  In this case, either find a time to close your door and remain undisturbed except for emergencies or discipline yourself to return to the list immediately after dealing with other situations.) 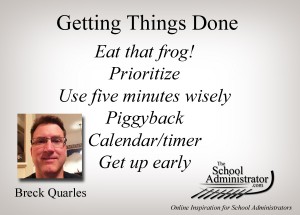 3) Use five minutes wisely – This has been one of the greatest tools I have found to help get things accomplished. Distractions are common in education. There can be a lot of waiting for students, teachers, parents, etc.  I try to use the intervals while I’m waiting to complete productive tasks. For example, while waiting for a student to arrive in my office, I will spend a few minutes working on one of the tasks on my list. When I was teaching, I would grade papers at odd times, such as while waiting for my car to get fixed. I might not get a lot accomplished in these short intervals, but by the end of the day, each of these short intervals will have added up.

4) Piggyback (success begets success) – Sometimes, it is possible to get bogged down in a task and feel like nothing is being accomplished.  This often happens when I am working on new projects that require creative thinking.  When I get bogged down, instead of trying to plow through, I’ll stop and do something I know I can be successful at. For example, at home, I may mow the lawn.  This is simple enough and it allows my mind to think more clearly.  At work, I may do a few walk throughs.  This gets me out of the office and also lets me see good things happening in the building.  With a success under my belt, I can return to the initial task with renewed vigor.

5) Calendar/timer – “Work expands so as to fill the time available for its completion.” -Parkinson’s Law.  Writing things on a daily calendar has a magical quality about it. For some reason, putting things on a calendar and setting a specific time frame to work on them helps with focus.  I will also set a timer for the amount of time to work on one task.  In this way, I know that during this one specific time, I will focus on this one task and, when the timer goes off, I can move to something else.  Often, I will finish during the allotted time.

6) Get up early – I’ve found I can accomplish more between five and seven AM than during the rest of the day combined.  Part of this is because I’m fresh and part is because of the lack of distractions.  It takes some discipline (and summer has not helped), but the reward is worth it.

These are just a few of the strategies I’ve used to beat procrastination and accomplish more.  Please feel free to add others that have worked for you. 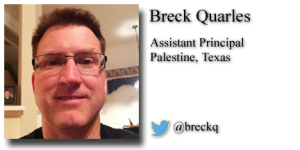